Bringing love and cheer to the underprivileged and needy children 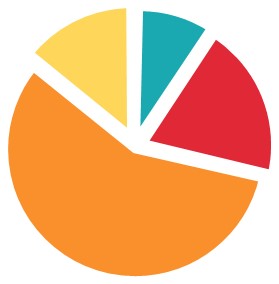 Do you know how much of your giving goes to the objective of the donation ?

According to Charity Navigator (a charity rating site), any nonprofits organisations which spend more than 33.3% (that is a third) of their total budget on overhead is simply not meeting its mission as opposed to its administrative expenses. As a donor, this is something to be considered when putting your donations to good work !

Examples of Charity that did well

The do-gooders at the American Red Cross do a good job of spending your money when you donate. They manage to keep administrative expenses at less than 5% of their total overhead, and they spend 92.1% of their income on actual programs that benefit the community.

These brave folks at Doctors Without Borders go into the most deplorable conditions to bring healing to others. Approximately 86 to 89 cents of every dollar given goes to supporting the overall mission.

Invisible Children  is the group which produced the film Kony 2012, and started a highly successful social media campaign to spread awareness and social action with the goal to end the use of child soldiers in Uganda. The group spends about 80% of its donations to fund this goal.

Gotloveforkidz is an informal group of volunteers and would certainly try to keep to the high bar of well within 30% for administrative or marketing expenses, perhaps closer to within 10% as the aim should we ever formalise a nonprofit organisation structure.

Our vision and goal is to give donation proceeds 100% as intended. We are thankful that our volunteer friends recognise that there are overhead expenses that need to be covered and would chip in to balance the books.

So do consider our needs as well. We will appreciate your make donations to cover our administrative and overheads expenses that are occurred to maintain our activities. Thank you.

Articles, Fundraising
« iDEA for experiement – Book drop for all children

A social group of individuals who believes in getting involved and rallying people around donation and volunteering drive to bring love and gifts to the underprivileged or needy children.